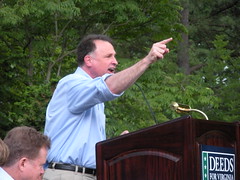 All Virginians should support Creigh Deeds, but here are some answers to progressive Northern Virginians who might ask why they should work hard to elect Creigh.

Okay?  Now go to DeedsforVirginia,  sign up to help,  contribute, and join Creigh and President Obama on August 6th at the Rally for Virginia.  Thanks.