Jody Wagner: First to File, First on the Ballot, First in the hearts of Virgnians

Jody Wagner filed her signatures at the State Board of Elections on Tuesday and 12:00 noon, becoming the  first, and so far only, candidate to file for Lt. Governor.  Jody’s prompt filing gives her first place on the ballot this fall.  Jody filed a total of 17,858 signatures from across the Commonwealth.  Jody thanked her supporters for their hard work, and promptly resumed her travels  around Virginia, addressing the economy and other issues important to Virginia voters.   Thanks to everyone who helped with this effort — now the real fun begins!

UPDATE:  The campaign has circulated this video from Jody  – also in the picture – me holding the box of  17, 858  signatures,  Elizabeth, Micheal, and Tyee from Jody’s excellent staff, and Kevin Wolf’s chin.   I will post some better pictures of Kevin, who did an extraordinary job in making this happen. 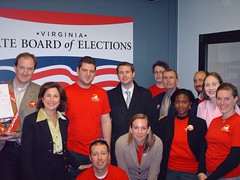