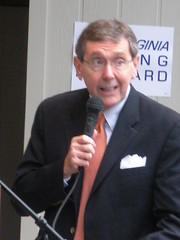 candidates, recalled the successes of the Warner and Kaine administrations (best managed state in the country, etc.), and made it clear that the GOP candidate opposed those progressive efforts.  Sen. Mary Margaret Whipple in particular pointed out GOP opposition to adequate funding for education.  Cranwell said that the GOP candidate was trying to reinvent himself as a moderate, but it won’t work.  Cranwell, who is running for reelection as state party chair will be attending events around the Commonwealth today to tell the truth about the GOP ticket.